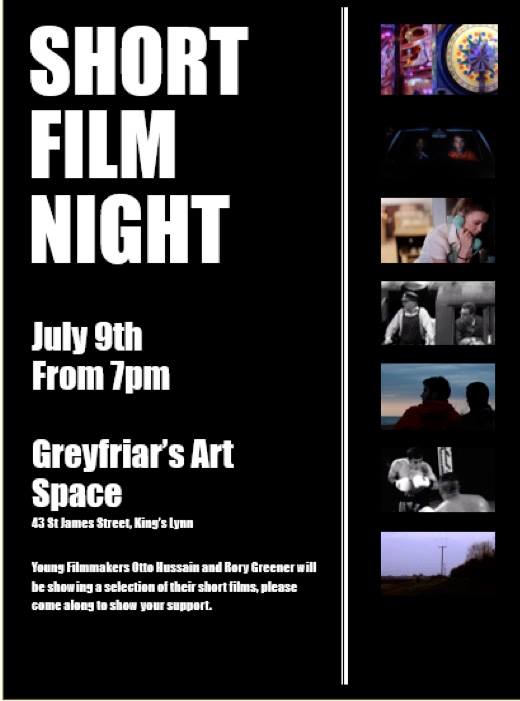 Young filmmakers, Otto Hussain and Rory Greener, would like to invite you to a SHORT FILM NIGHT showing a selection of their short films, this coming Sunday 9 July at 7pm. Free admission.

A short experimental piece made to think about the amount of footage that is left unused by film makers. The most beautiful shots will remain forever unseen as the right eye has not found them yet, musing ideas of creating an artistic reference of everything and allowing the medium to move ahead of the idea of ‘usable footage’. This film attempts to approach that by creating a tone with my own personally unused video.”

“A short Documentary piece which captures moments in the lives of individuals as they enjoy a night at the mart. Set to “Blue Spotted Tail” by Fleet Foxes.”

“An observational documentary exploring the environment of the independent UK MMA scene. Sacramento experimental band Waning provided the soundtrack, mixing this with a harsh black and white grayscale. The film attempts to convey the more foreboding sense of not being able to ‘make it’.”

screening of my most recent film, with Rory Greener behind the camera. Set in and around our dreary little town of King’s Lynn, Matchbox is a story about a young couple falling in and out of love with one another.”

“A documentary following a Signalman working at Corfe’s visually stunning steam railway line. Exploring the fascination with steam railways and its seemingly ageless appeal. As well as the musings concerning the future of the steam railway.”

“The backstage story of a stuntman wrestling with his own tenacious ambition.”